Aaron was a developer advocate at Nexmo. A seasoned software engineer and wannabe digital artist Aaron is frequently found creating things with code, or electro...

When working with the Vonage Communication APIs—or any API really—you should be cognizant of their rate limits. Rate limits are one of the ways service providers can reduce the load on their servers, prevent malicious activity, or ensure a single user is not monopolizing the available resources.

This tutorial also uses a virtual phone number. To purchase one, go to Numbers > Buy Numbers and search for one that meets your needs. If you’ve just signed up, the initial cost of a number will be easily covered by your available credit.

What Does it Mean to be a Good API Citizen?

When working with external APIs, we should always attempt to keep our throughput at an acceptable level. But mistakes happen, there might be a sudden surge in usage, and we end up exceeding the rate limit causing our API call to fail.

When this happens, it can be tempting to try again immediately, but doing so is counter-productive. If your API calls are failing because you have hit the rate limit, this is the service telling you to slow down. Immediately trying the same request again is not slowing down and can lead you to be banned from some services. Instead, you should “back off” and pause before trying again.

A backoff is where you wait before taking an action. The amount of time to wait can be calculated using many different strategies, but a few of the most common are:

There are other strategies—fixed, linear, polynomial—but for the sake of this article, we’re going to stick with the Exponential backoff strategy provided by the Python backoff package.

I don’t want to trigger Vonage’s API rate limit just to demonstrate the Backoff package; instead, let’s create some mock code with asyncio.

In this example the slow_operation() function logs the milliseconds since the epoch and then returns False, ensuring the backoff decorator runs each time we call the function. Backoff will keep executing slow_operation() until the delay reaches the max_time of 300 seconds, at which point it will give up.

To generate plenty of data points for the graph, we queue up the slow_operation() function 500 times within our asyncio loop.

If we graph the number of function calls attempted per second, this is what it looks like when we use a constant strategy: 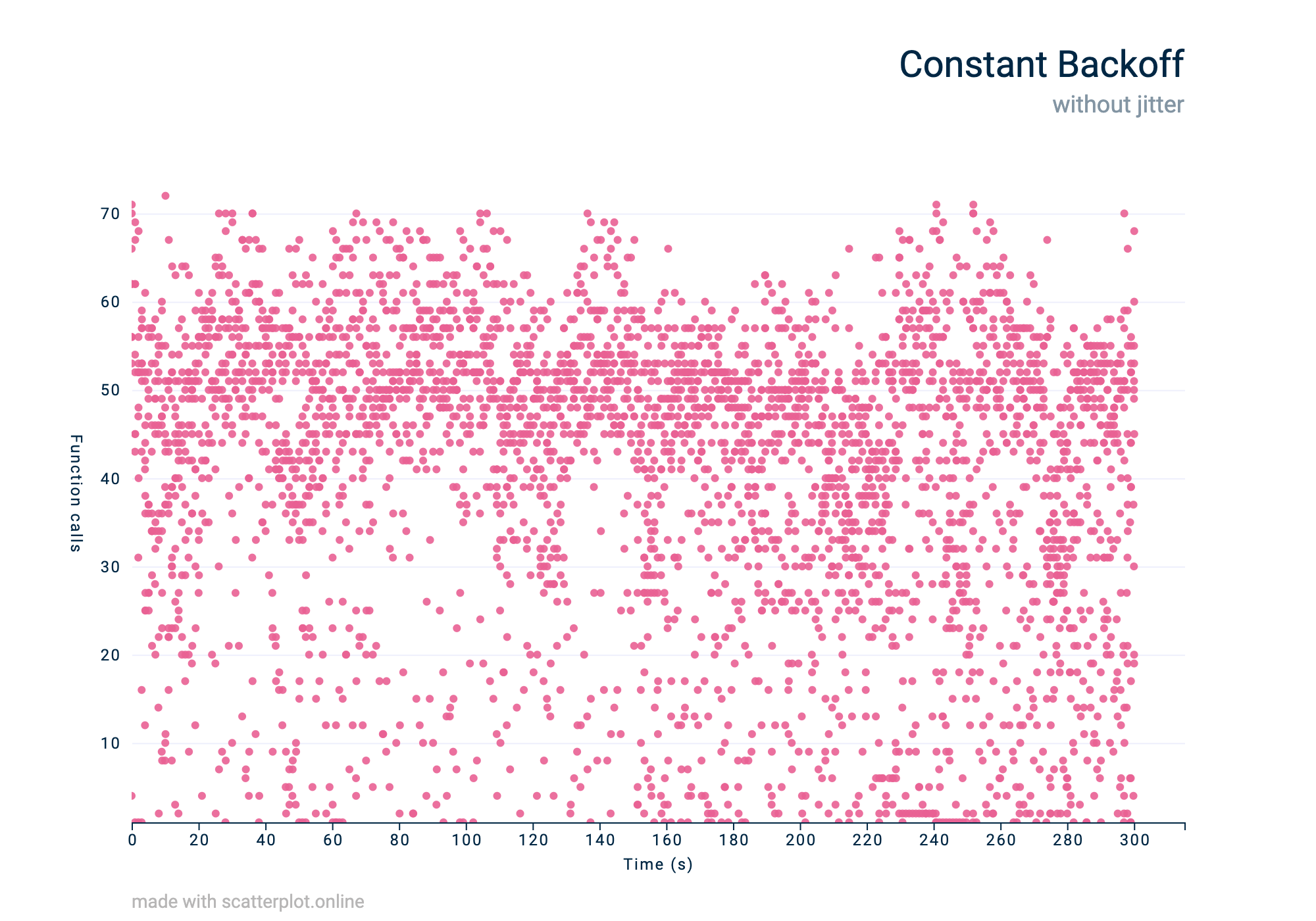 There is a thick band in the 40 to 60 function calls range, so a constant backoff is not appropriate for our needs. Each second we’re flooding the API with requests keeping our throughput far too high, and we’re likely to continue to be rate limited.

But if we run the same code with the exponential strategy, we get a very different graph. 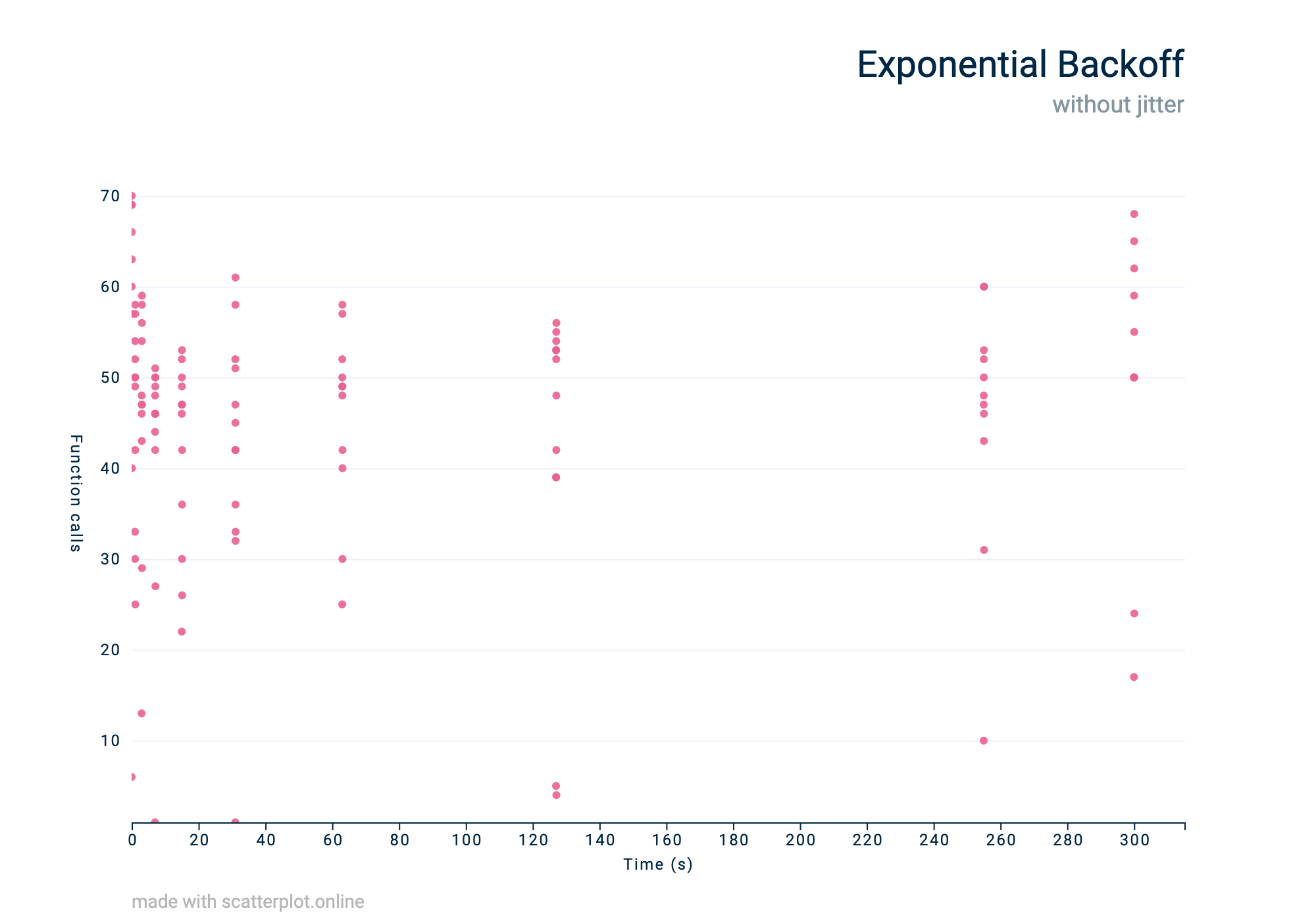 This graph is much better. We can see where the backoff strategy has increased the delay reducing the throughput and hopefully giving us enough time to end the rate-limiting. But now we have another issue.

In the graph, we can see the calls are now bunching together around the end of the delays. We could end up in a situation where these bunches keep triggering the rate-limiting again. To stop these bunches forming, we use jitter.

Jitter adds a random factor to delay duration calculation in our backoff.

The Python backoff package includes this jitter by default. In the code examples above I’m removing it with a lambda function, so let’s generate the exponential graph again, but this time with jitter. 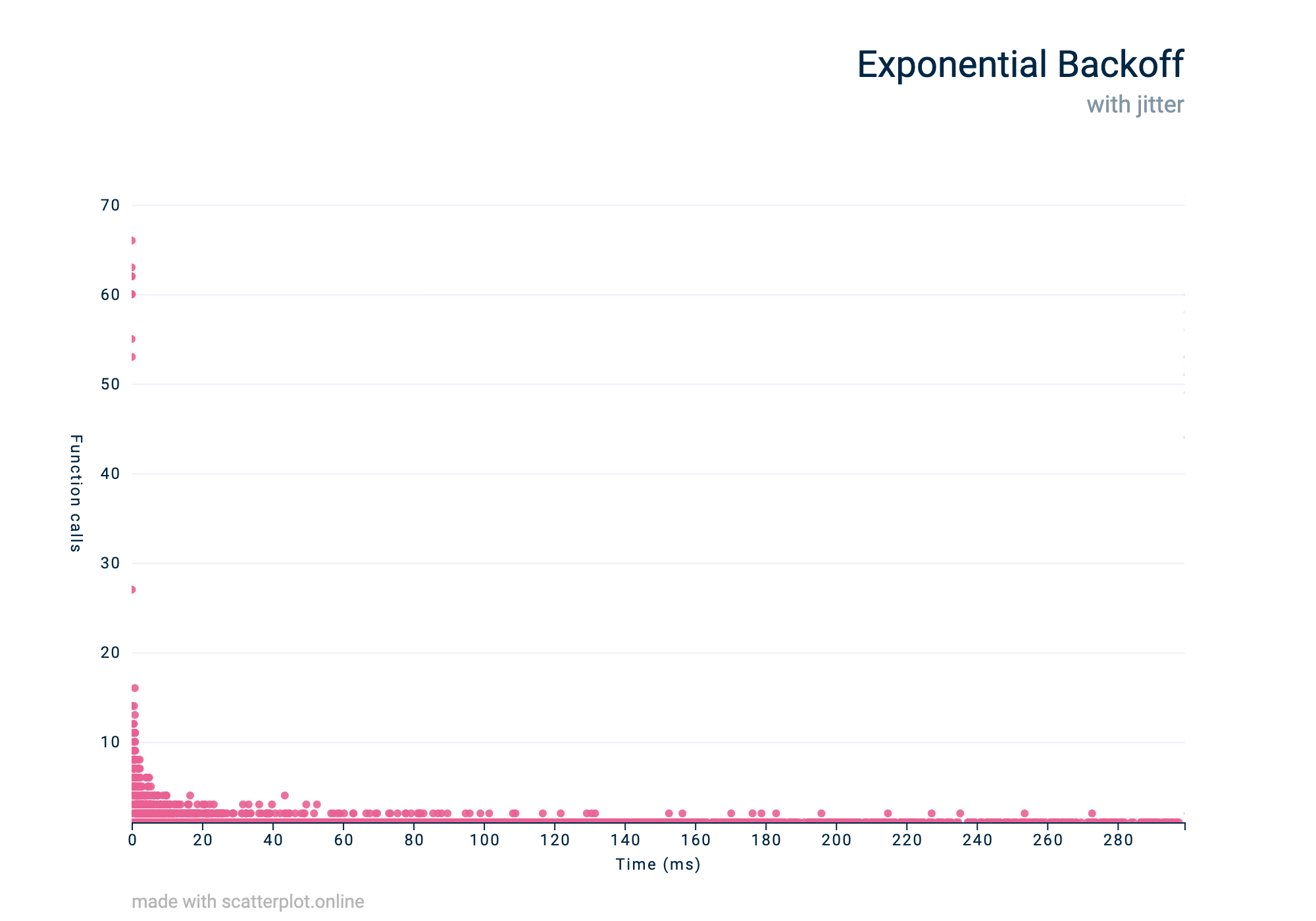 As we’re still using an exponential strategy, we can see that the number of calls drops off very quickly, but thanks to the added randomness of the jitter, we don’t see any bunching. Instead, the function calls per second are low and more evenly distributed.

Rate limits vary depending upon the Vonage Communications API you are using. For example, the Redact and Application APIs have a rate limit of 170 requests per second. However, due to carrier restrictions, the rate limit for outbound SMS can be as low as one request per second. Making SMS the perfect candidate for applying the backoff techniques we looked at above.

Python has a large number of task queues to choose from—Celery, [huey²], RQ, Kuyruk, Taskmaster, Dramatiq, WorQ—and almost as many brokers—MongoDB, Redis, RabbitMQ, SQS. Some of these task queues come with support for backoff built-in, but they also add a lot of complexity, making them out of scope for this article.

However, once you’re comfortable with the underlying techniques and the reasoning behind using a task queue, backoff, jitter, and so on, then I recommend you revisit the links to the task queues above. The code examples we will be looking at in the rest of this article are intentionally succinct so we can focus on only throughput management; where-as the packages above are much more robust and production-ready.

To ensure that network latency on any one request doesn’t block our entire application we’re going to send our SMS asynchronously. But, this does mean we cannot use the Vonage Python SDK to send our SMS. The Python SDK is not async as it uses Requests, which is blocking.

We can look at the Messages API example request from the documentation to get an idea of what the Vonage Python SDK is doing for us:

In this code snippet, we can see that we’re issuing a POST request to the endpoint https://api.nexmo.com/v0.1/message. The request includes some information about the type of content we’re sending and expecting as a response. But, the essential parts to note is the Authorization header and the data (-d) option.

The request is Authorized using JSON Web Tokens (JWT). JWT is an open industry standard, and there are several Python packages available to help with their generation. But, handily the Vonage Python SDK already has a function we can call to create a valid JWT for the request. As the JWT generation is swift, does not require any Network I/O, and is only performed once at the start of the script, it doesn’t matter that it is not asynchronous.

If using the CLI, the --messages-status-url and --messages-inbound-url flags are not relevant for these examples, but they are required. You can set them to https://example.com.

This command will store your private key in the file private.key. We’ll need this when generating our JWT, along with the application id. The application id is output in the terminal when you run the app:create command, or you can find it on your dashboard.

At the top of our script, outside of the async function, we instantiate our Vonage client with the application id and private key. I’ve stored these in environmental variables, so they’re not hard-coded within my script.

The send_sms function makes the API request, so this function has our backoff decorator. We’re using on_predicate, so if the function returns False, it will attempt it again. I’ve kept the max_time at 300 seconds, but we could also set a max_attempt limit or both!

To make the asynchronous POST request, we use httpx. httpx is an HTTP client for Python 3 with a very similar interface as Requests, but it supports async. I structured the httpx request as close as possible to the cURL example we looked at above. We have the headers with the content type information as well as the Authorization header which includes the JWT generated for us by the Vonage Python SDK.

Our payload is a JSON string containing the from number, the recipient’s number and our message.

Finally, we check the HTTP status code returned by the Messages API to the request. Anything other than a 202 Accepted will cause the function to return False triggering another attempt.

Queueing the SMS in a Loop

In my example script, I have just hardcoded a list of recipients.

But this is where you could use a task queue or a broker. Also, I’m also not being a good API citizen! I know that the Message API has a rate limit of 1 message per second when sending messages within the US, but I have no delay in my loop!

My script will attempt to make the API calls with no delay between them, very quickly triggering the rate-limiting. While the backoff helps us manage when we do exceed the maximum throughput allowed, it should be a last resort. Ideally, to be most efficient, we want to get as close to the rate limit, but without exceeding it. The addition of a short sleep when adding tasks to the loop should help with this.

Putting it All Together

In this recording I’ve removed the sleep and modified the example so that it attempts to make several hundred requests at a time, causing it to nearly instantly trigger throttling by Vonage. But watch what happens after a few seconds.

Almost as soon as the script begins, we see it exceeds the Messages API rate limit, and the endpoint begins to return an HTTP status of 429 “Too Many Requests”. So, the script starts to backoff. At first, the number of failed requests seems to remain about the same, but as the delay increases exponentially the number of failed requests drops off within a few seconds, and our script can begin sending again.

Without production load, it can be quite tricky to generate enough requests to trigger the rate limiting. You can check out the example script from this tutorial as well as usage instructions on GitHub.

Please note that sending messages will charge your account. If you routinely send enough messages to become rate limited, you might violate the Vonage terms of service; also the carriers will not look upon you sending the same message hundreds of times favorably! So I do recommend if you do want to try this for yourself that you don’t test it against the live Messages API but instead mock it out. There are several packages for httpx to make this process easier, including pytest-httpx and respx.

We’ve only looked at some of the functionality available with Python backoff. Check the documentation for more information on supplying different backoff strategies for different types of exceptions, or the various events which backoff emits. Try modifying the example code so that if backoff executes the on_giveup handler, the script will use the Vonage Voice API to phone the on-call engineer.